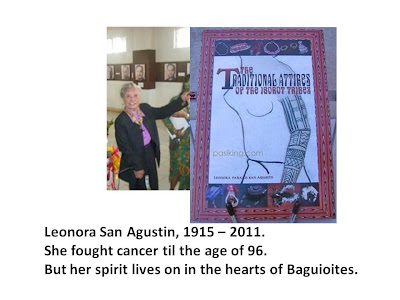 The Baguio city council Resolution 440, s. 2011, is a condolence message to the family of the late Leonora “Leonie” Paraan-San Agustin - who passed away on Nov. 29.

A well-known Baguio fact: a label stuck with her and together with Ms. Cecile Afable and Ms. Gene De Guia, as the “Three witches of Baguio,” for their efforts and concerns for the environment and programs for the preservation of culture.

Her love for Baguio, its culture, the people, and environment made her a prominent figure in various fora and lectures that somehow initiated a strong awareness on the richness of the Cordillera culture. She singlehandedly wrote the book, “The Traditional Attires of the Igorot Tribes” from her painstaking research and collection of photographs This book became popular as the handbook for wearing a G-string loincloth properly, step by step.

She was already a Baguio institution long before she passed away at age 96. She was a rare gem.

WE REMEMBER YOU: ALWAYS!

Your kind prayers for the departed souls of our dearest classmates, are much appreciated.